The Birthplace of Modern Middlesbrough

Port of Middlesbrough’s history can be traced back to 1830, when an extension of the Stockton & Darlington Railway opened to deliver coal from the Durham coalfields to the new coal export staiths in Middlesbrough. The port was in fact the birthplace of modern Middlesbrough.

This timeline highlights key events in Middlesbrough’s history that shaped the port and the local area. It covers some of the wider developments linked to and around the port including urban developments, river developments, celebrations in the town and the wars.

The original quayside continued trading and throughout the first half of the 20th century was operated by T Roddam Dent and Sons and was known as Dents Wharf, the adjacent picture being from 1950.

It wasn’t till 1970 that Arthur Vernon Dawson, the grandfather of current managing director Gary Dawson bought the land from the Dent family, to build a new yard from which to operate an expanding haulage business and to develop the first multi-user industrial estate in Middlesbrough.

The smaller quay that is owned, closest to the Transporter bridge was known as Tyne Tees Wharf and was once operated by the Tyne Tees Steam Shipping Company until the 1940’s- it had the only Bonded Warehouse on the Tees at the time, the remnants of which we demolished in the 1980s.

Moving into the late 1980s when the National Dock Labour Scheme was abolished by Margaret Thatcher, AV Dawson gained a license to operate its first quay. This is when the quayside changed from being called Middlesbrough Wharf and became known as Dawson’s Wharf.

The company then purchased the Ayrton Rolling Mill from British Steel in 1985 and renamed it as the Ayrton Railhead and Store. Further land acquisitions included the Linthorpe Dinsdale Yard in 1998 (the quay being known as Lin-Din, which was then re-branded North Sea Supply Base).

This was followed by additional purchases of several plots of land to the south of Forty Foot Road, alongside the Middlesbrough Goods Rail Yard. These sites once developed became collectively known as the Tees Riverside Intermodal Park (TRIP Terminal). Latterly a 99-year lease of Middlesbrough Goods Yard was taken from Network Rail.

On 17 September 2020 AV Dawson returned to its roots by renaming its site Port of Middlesbrough – An AV Dawson Facility.

In stark contrast to the busy town centre that it would become over the century, Middlesbrough's population in 1801 stood only at 25 people, centred around Middlesbrough Farmhouse. 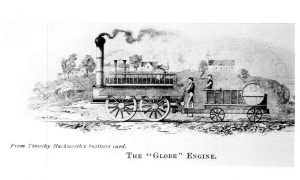 In 1825, the world's first publicly-owned, steam powered passenger railway opened to great fanfare between Stockton and Darlington in a 'red letter' day in the world transport history.

The coal staiths at Port Darlington, on the site of AV Dawson's present-day Port of Middlesbrough, were officially unveiled by the Stockton and Darlington Railway Company on 27th December 1830 with the opening of the Middlesbrough Branch Railway.

The first cargo to be exported from Darlington was coal. it was transported to the staiths at Port Darlington and transferred to the steamship 'Sunniside'. As trade increased, Middlesbrough became known as a important port.

As the coal export industry thrived it became apparent that the early staiths constructed at Port of Middlesbrough were insufficient to sustain the expanding enterprise and it was decided a dock would be better suited to the town's needs.

Within 20 years of the staiths opening in Middlesbrough, the town would be transformed from a dependence on coal export to one that would be defined by iron.

The Chancellor of the Exchequer William Gladstone visited Middlesbrough and famously described it as a "remarkable place-the youngest child,as I may call it,of England's enterprise... an infant Hercules."

Marking half a century since the official opening of the coal staiths-although celebrations were delayed one year due to economic turmoil in the iron industry- Middlesbrough marked its Jubilee with a range of celebrations.

The iconic Tees Transporter Bridge was officially opened on the 17th October 1911.It is one of only around 30 ever built and is the longest, operational transporter bridge in the world.

Middlesbrough and the industries along the River Tees played a important role in the first World War as the town and the numerous local works mobilised to support the country's efforts.

The Interwar years proved to be challenging times along the River Tees with unstable economic conditions bringing closures and conflict in the area's industries.Despite this, extensive investment was underway at Dents Wharf.

As in the First World War, the industries along the River Tees played a central part in the area's contribution to the war effort, with locally produced iron and steel being used to make military weapons and ammunition -this also made the area a target for air raid attacks.

One of the many changes occurring during the post-war era was the closure and contraction of many of the heavy industries along the south bank of the Tees at Middlesbrough as manufacturing-particularly of iron and steel- shifted downstream.Despite this, private sector investment and expansion continued at the port of facilities in Middlesbrough.

To mark the 150th anniversary of the birth of modern Middlesbrough, a year-long programme of events and celebrations was arranged to take place throughout 1980.

The 1980's and 1990's heralded a new chapter and era of change for the River Tees. New opportunities were emerging in the oil and gas sector, resulting in investment in new port infrastructure in Middlesbrough. Changes in legislation gave port operators and terminals more autonomy and independence.

Uniting to Protect the Community

The mid 1990's brought the Tees community together for protection through the introduction of new organisations and infrastructure developments. This included creating a new body to represent and protect the interests of the local shipping industry and building the Tees Barrage to provide a flood defence.

Port of Middlesbrough is Reborn