The coal staiths at Port Darlington, on the site of AV Dawson’s present-day Port of Middlesbrough, were officially unveiled by the Stockton and Darlington Railway Company on 27 December 1830 with the opening of the Middlesbrough Branch Railway.

Owing to the town having developed as an extension of the Stockton & Darlington Railway, modern Middlesbrough can lay claim to being the world’s first planned railway new town.

In 1831, when a miners' strike shut down pits around the Tyne and the Wear, the Tees became the only coal-exporting river in north east England.

Staiths were elevated platforms for discharging coal and other materials from railway cars into coal ships for transport.

A steam engine hoisted a wagon full of coal off the line and about 20 feet into the air, where it landed on a gantry. A horse then pulled the wagon along the gantry and out over the water. At the end of the gantry, the wagon was strapped into a cradle and, with a man clinging to it, was swung in an arc on to the ship below. Here, the man unbolted the bottom of the wagon and the coal fell into the hold. Finally, the weight of the next full wagon swinging downwards caused the empty wagon and the man to swing upwards back to the gantry. 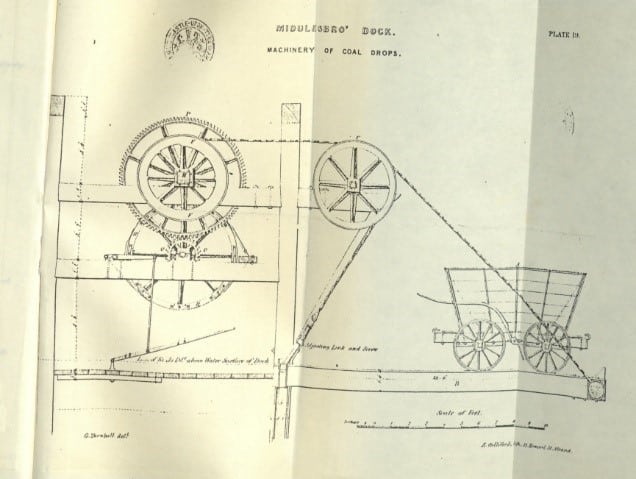 Above: Illustrations of staiths of the era (Source: Coal Drops, Middlesbrough)

Today the staiths have been replaced with around one kilometre of quayside. You can however visit a commemorative plaque displayed on the viewing platform adjacent to the Transporter Bridge, which celebrates the staiths at Port Darlington.

Middlesbrough was one of the fastest growing towns in Victorian England. In 1831 the population of Middlesbrough amounted to 2,350 (other sources say 154), and by the census of 1841 the population had increased to 5,423. The cause of this rapid increase was due to the extension of the Stockton & Darlington Railway to Middlesbrough, where the depth of water was greater than at Stockton, and where, consequently, larger ships could be loaded or discharged.

For the opening ceremony on 27 December 1830, “Globe”, a new locomotive designed by Timothy Hackworth for passenger trains, hauled people in carriages and wagons fitted with seats across the bridge to the staiths at Port Darlington.

To mark the momentous occasion, nearly 600 guests gathered in temporary accommodation for a celebration dinner on the banks of the River Tees. The staiths were lit by portable gas – the first ever burnt in Middlesbrough.

When freight trains were first introduced, the tracks were still being used for horse-drawn passenger coaches – which created anarchy on the lines. This resulted in protests by the owners of the passenger coaches (which were usually pub owners whose inns were near the rail line and acted as stations). As part of the protests, the publicans left their horses on the rail lines and sadly some horses were run down by trains.

The Globe worked on the local rail network hauling passenger trains for nine years, before blowing up due to it running out of water. It was never rebuilt

Timothy Hackworth (1786-1850), originally from Northumberland, was very much a railway pioneer. The celebrated steam locomotive engineer designed the staiths at Port Darlington. He also designed the Globe, which made its debut journey on 27 December 1830 and was the first train to visit Port Darlington.

Hackworth was over 6ft tall, with a muscular physique acquired while training as an apprentice blacksmith. He valued his work, his family, his employees and his religion.

Hackworth was requested by the Committee to build a suitable engine for the proposed extension of the line to Middlesbrough. Prior to this, engines had been built for hauling heavy wagons of coal so they were not required to go fast. The new engine was needed for a train that would be carrying passengers – something faster and more reliable. This new locomotive, which Hackworth called the ‘Globe’, was very different in its design and look and marked a new era in the world of trains. It achieved speeds of 50 miles per hour, which was particularly fast at the time.

“On arriving at Middlesbrough, the procession was received with loud acclamations by the assembled multitude, and the firing of guns from the vessels in the river, and of others on the shore. Flags of every size and description, from the Union-jack of England downward, floated on the breeze from the roofs of the respective buildings, and the day being uncommonly fine, the appearance of the whole was highly picturesque and beautiful.” Durham Chronicle, 1st January 1831.

Hackworth also become famous for an ingenious wheel design known as the Hackworth Plug Wheel. With the exception of the Globe, this was used on nearly every other engine on the Stockton & Darlington Railway and other railways for many years. It was cast iron with wrought iron tyres shrunk on. Hackworth was the first to apply the wrought iron tyre to a wheel. The wheel was also dotted with curious plug holes (hence the name plug wheel) to ensure sound castings and reduce unnecessary weight, and in practice were found extremely efficient. (Source Timothy Hackworth and the Locomotive by Robert Young 1923).

Return to the timeline