Find out more about about AV Dawson's history.
CONTACT US

From starting the business in the 1930s with a horse and cart to rebranding it’s site as Port of Middlesbrough, read the story of AV Dawson – one of Teesside’s largest family businesses. 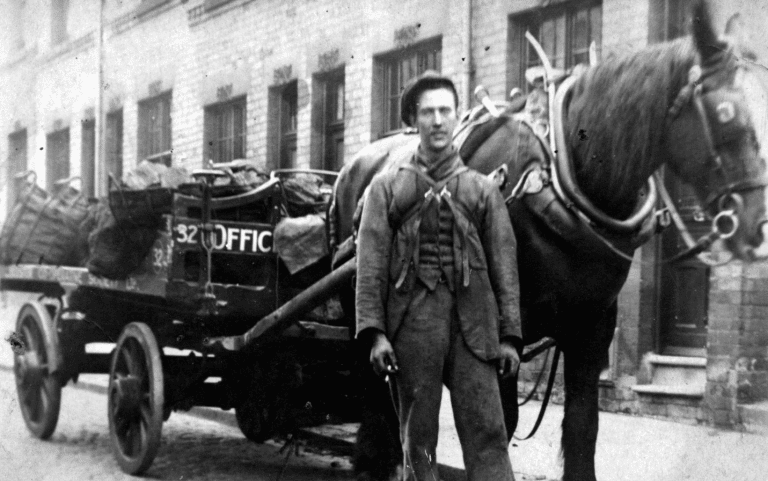 Arthur Vernon Dawson buys a horse and cart for £50 and starts the business.

In 1938, AV Dawson was founded by Arthur Vernon Dawson, the grandfather of current managing director Gary Dawson. ‘Vernie (as he was more well-known), was 18 when he started the business. With the princely sum of £50 raised through the sale of a second-hand car, he bought a horse called Dina, a cart and a load of coal to sell on the streets of Middlesbrough. 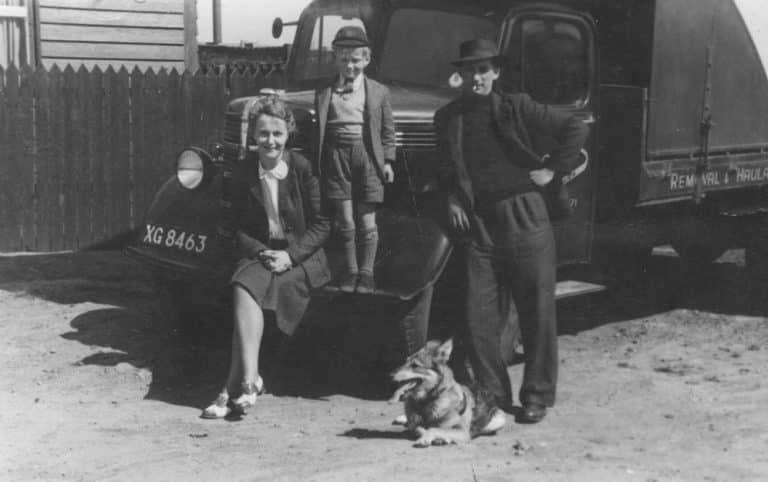 In 1947, Vernie sold the coal business to another Middlesbrough businessman, Tom Woodhouse. 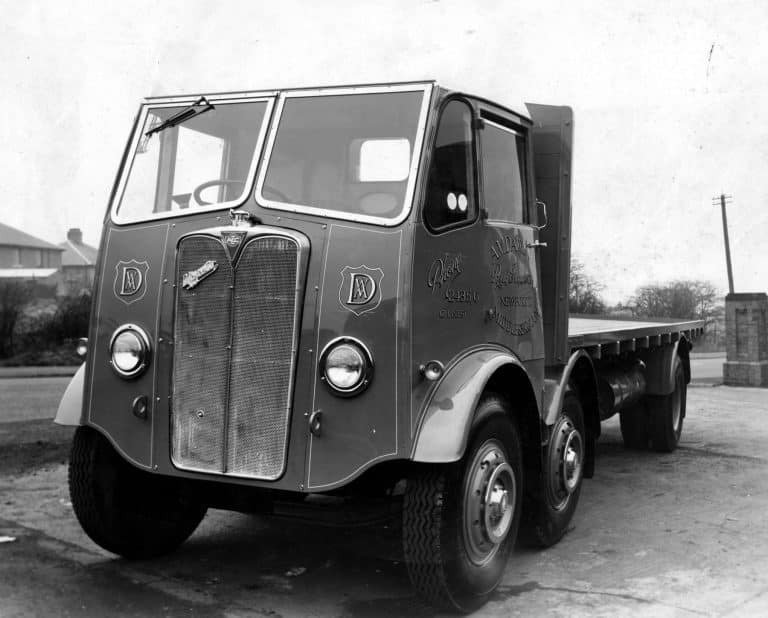 Maurice joins as an apprentice and the business moves to larger premises on Newport Road.

As the fleet of trucks and trailers increased to support the growth of the business, the company was outgrowing its premises on Emmerson Street. In 1956, it moved to a new, larger facility on Newport Road in Middlesbrough.

A young Maurice Dawson left school to join the company that year, at the age of 15. Vernie’s wife Eleanor was also heavily involved in the business at the time, managing the finances and administration. Maurice completed an apprenticeship as a diesel fitter in the workshops within the company, as well as spending several years as a long-distance lorry driver. 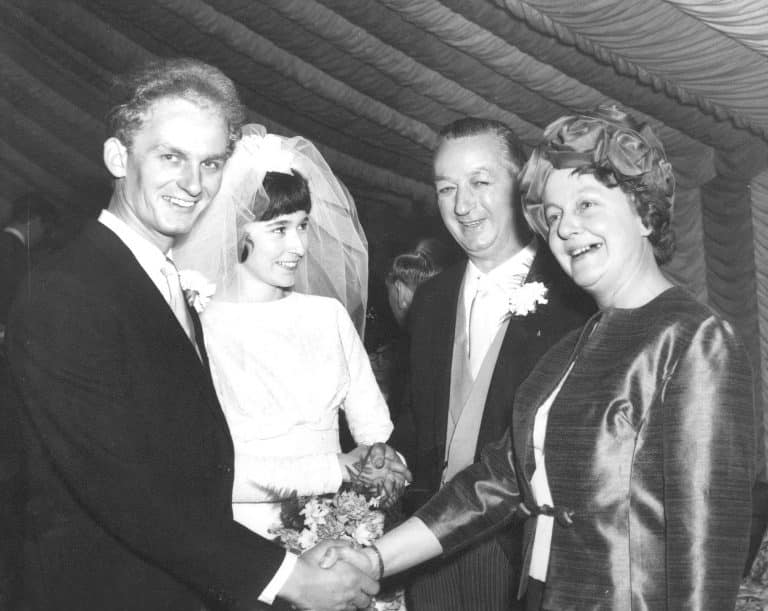 Another move to a larger premises

The business moves to Lloyd Street and Maurice later takes over as joint managing director with his mother, Eleanor.

It wasn’t long before the business grew further, moving to a new base less than a mile away on Lloyd Street.

Maurice married his childhood sweetheart Barbara in 1966 – another strong woman to join the AV Dawson family.
In 1971, Vernie retired due to ill health and Maurice became joint managing director at 30 years old alongside his mother, Eleanor. 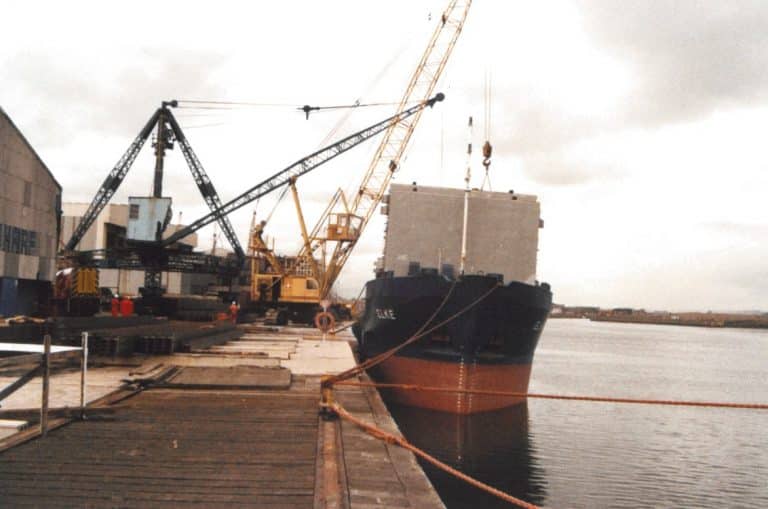 It was in 1973 that the business made the most significant move in its history, acquiring a six-acre site on the south bank of the River Tees. Purchased from the Dent Family, the site, which at the time was known as Dent’s Wharf, was renamed as Middlesbrough Wharf Trading Estate. This section of the river is reported to be the birthplace of modern Middlesbrough and home to its oldest wharf, dating back to 1830 where it served the growing steel and ironworks. The wharf was originally known as Port Darlington and then Port of Middlesbrough. AV Dawson still operates from this site today.

By 1980, the site had grown to 11 acres and the company had increased its transport fleet with the acquisition of WG Thomas, increasing to more than 60 vehicles. As part of a strategy to further diversify, AV Dawson commissioned both industrial units and small warehouses to be built on its site.. 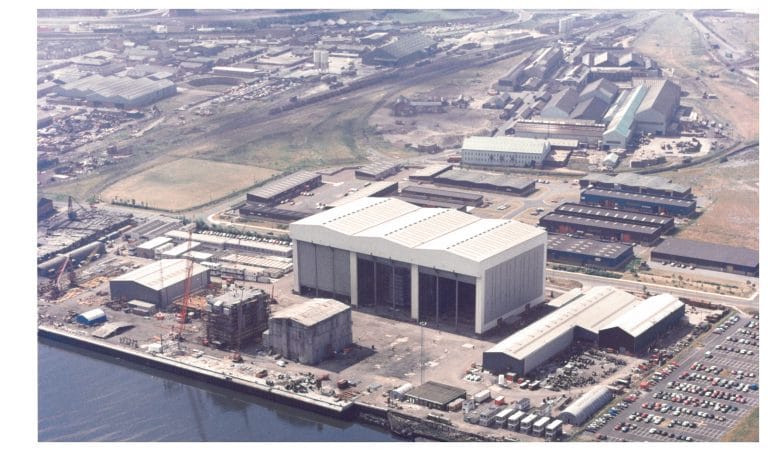 AV Dawson secures its licence to operate the wharf and start loading and unloading ships.

After battling the recession and recovering from the brink of closure in 1984, diversification was vital.
In 1985, AV Dawson secured a much sought-after licence to bring the Middlesbrough Wharf back to life after being closed for many years. The new Dawson’s Wharf, as it became known, was now able to accommodate ships from across the globe and provide stevedoring services to load and unload export and import cargoes.

AV Dawson immediately began loading bulk fertiliser by conveyor and built its first concrete quayside in 1987. In 1989 a second quay was constructed predominantly for loading steel. 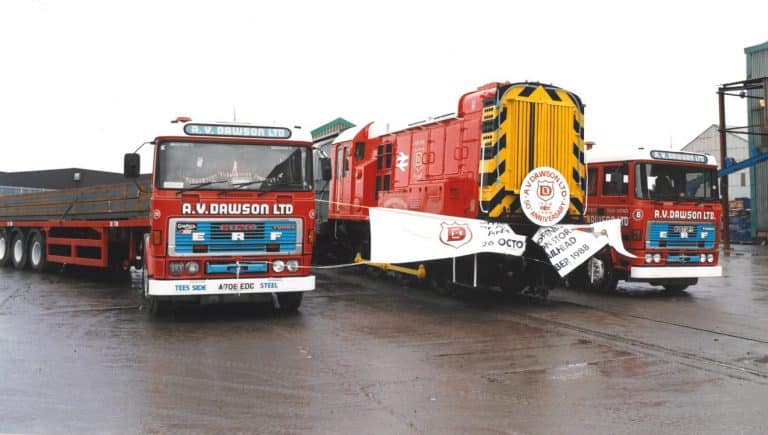 On the right track: Road to Rail

This positioned the business as a significant rail-connected warehouse owner. AV Dawson immediately filled this facility with 20,000 tonnes of mined potash, bulk bags of fertiliser for ICI, steel products for British Steel and Japanese steel coil for Nissan Sunderland.

The following year on the business’ 50th anniversary the Ayrton Store and rail terminal was opened by the then Minister of State for Transport, Michael Portillo. He officially opened the facility by driving one of the company’s locomotives onto the site. 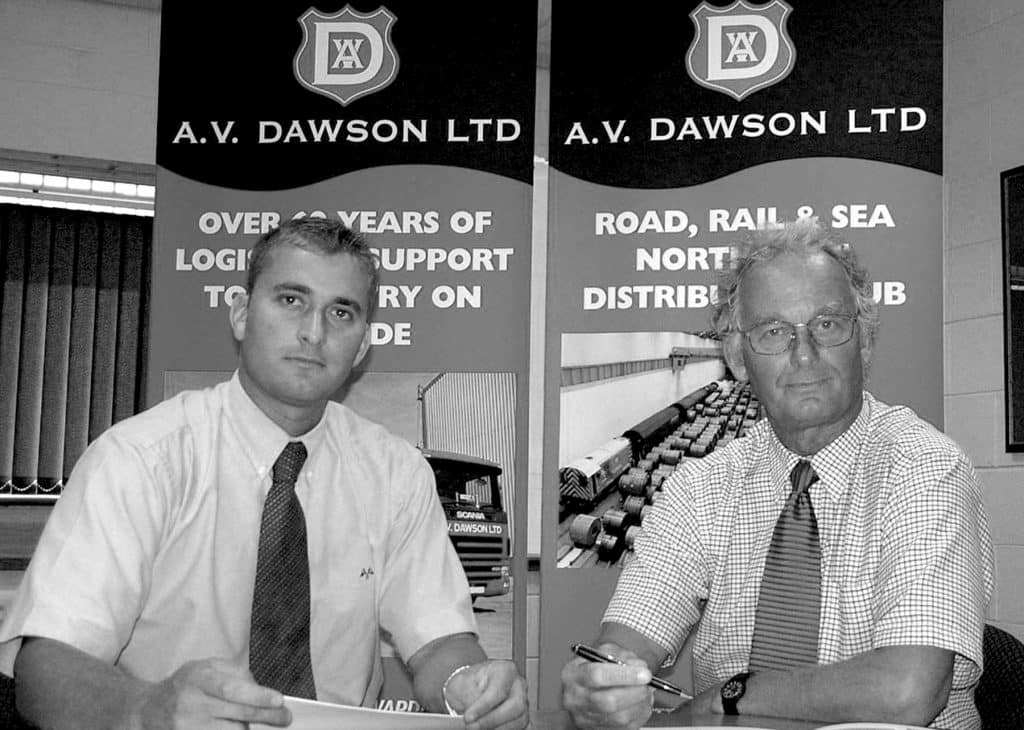 Growth of the Port

The business acquires an offshore fabrication yard and Gary takes over the reins.

AV Dawson purchased one of the most visible features on the Teesside landscape by acquiring the adjacent Linthorpe Dinsdale offshore fabrication yard, which included the iconic fabrication halls. This extension to AV Dawson’s port facilities enabled it to service larger ships and extend its quayside to approximately a kilometre in length. The 42-metre high halls can be seen from the A19.

Two years later, in 2000, Maurice handed over the reins to his son Gary, who had joined the business at the age of 22, and was now ready to follow in his father’s footsteps and take on the role of managing director at the age of 30. Maurice took on a new role as chairman, but continued to be actively involved in the business as the two men formed an incredible partnership to deliver the next chapter of the business’ growth. 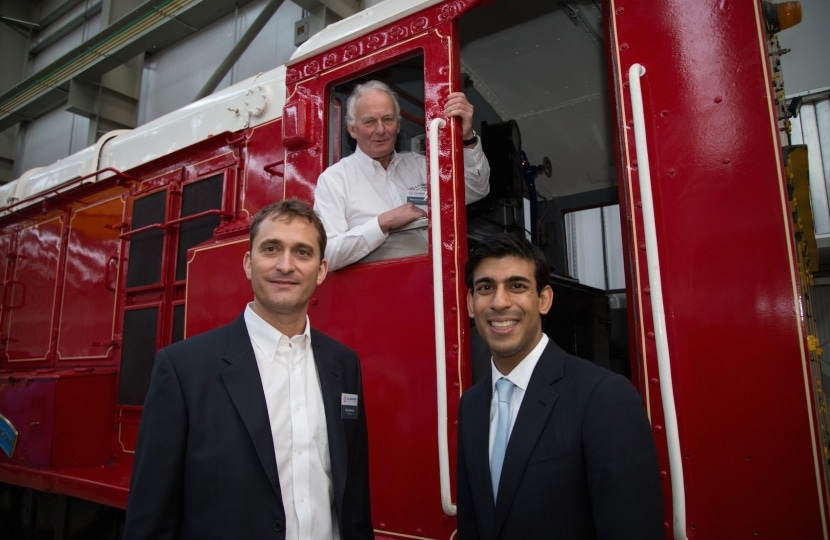 2012 saw the business commence a three year, £12.5m masterplan which enabled the business to grow its workforce by more than a third. The three-phase plan included an intermodal rail terminal to provide freight firms with a direct link to the East Coast Mainline and a project to extend its quay and dredge the river, creating deep-water berths to accommodate larger ships.

The development of the quayside complemented AV Dawson’s acquisition of Teesside based ships agency, Cockfield Knight in 2010, which at the time, was acting as ships agent for more than 50% of the vessels using AV Dawson’s berths.

AV Dawson’s rail expansion plans took a further leap forward in 2014 when it secured a 99-year lease of Middlesbrough Goods Yard. AV Dawson was now the largest and most diverse, independent rail terminal in the North of England.
The final phase of the plan was completed in 2015 with the opening of a £6.5m automotive metals distribution centre, which was officially opened by MP Rishi Sunak, who later became Chancellor of the Exchequer. 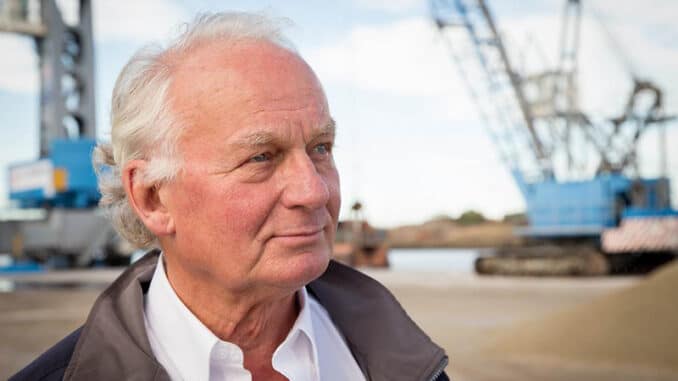 A legend leaves us

Maurice passes away but leaves a lasting legacy.
In December 2016 Maurice passed away, aged 75. Maurice had been heavily involved in the business until his last days. His death was hard for a number of colleagues as he had been an inspiration, a mentor and a father figure to many.
In the year before Maurice passed away he was awarded an honorary degree from Teesside University in recognition of his commitment to business.

Maurice was also instrumental in creating a set of company values to set out his clear wishes for how the business would operate moving forward. This initiated a major focus on people and succession planning – developing existing staff and bringing in new expertise to bolster the company’s professional support functions including health and safety, human resources and procurement. 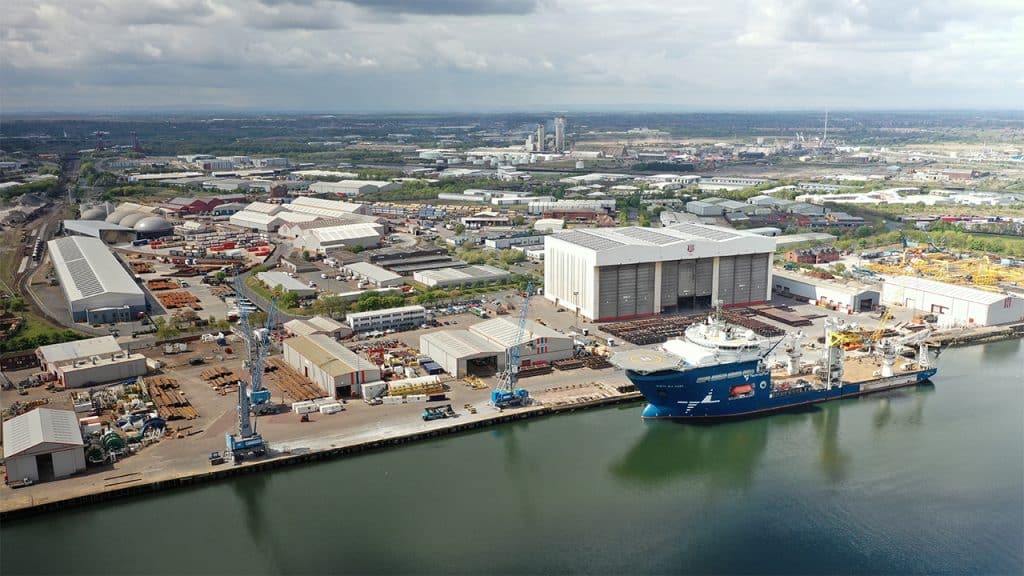 Port of Middlesbrough is reborn

The site is rebranded as Port of Middlesbrough, initiating the next phase of investment and growth.

In September 2020, AV Dawson officially rebranded its site as Port of Middlesbrough, reigniting the name of the site from 190 years earlier and positioning the business for future growth and expansion. This initiated a new port masterplan, with significant investment in major infrastructure projects supporting the renewables and waste-to-energy industries and a new flagship head office, which opened in 2022. 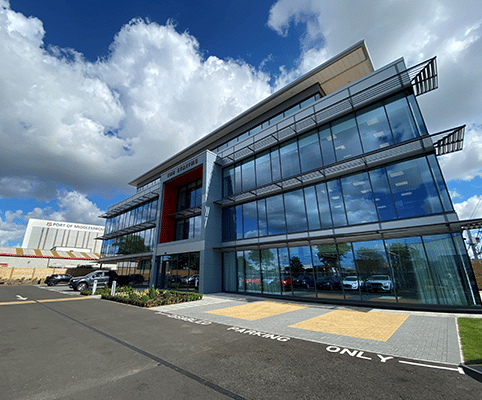 The Head Office building, called ‘The Staiths’ was completed in March 2022 and the name was unveiled at an exclusive event for colleagues in May 2022.

The name originates from the coal staiths at the old Port Darlington – which was the original name of the site. The Staiths celebrates both heritage and the future of the port and the town and marks the next chapter of the firm’s expansion.