A Day in the life - On the road with Mark edmonds

AV Dawson’s commercial and marketing director, Charlie Nettle tags along with one of AV Dawson Transport’s HGV Drivers, Mark Edmonds to see what it’s like spending a day on the road. Here he tells us how he got on. 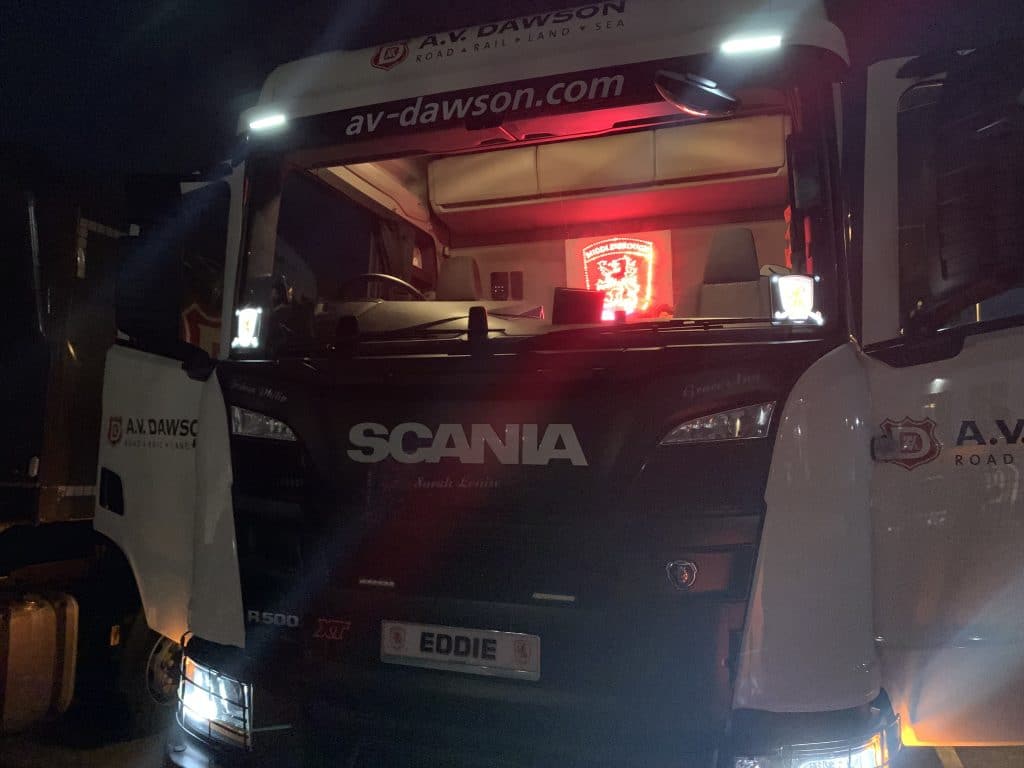 I met Mark at our security gatehouse at 5:30 and we walked across the road to the trailer park to find our vehicle. Mark is a full-time employee so one of our vehicles is permanently assigned to him. AV Dawson Transport is keen for drivers to feel at home in their trucks and so is comfortable if drivers request some minor modifications. As you can see Mark has an illuminated Middlesbrough FC badge inside the cab (I’m not sure we’d have been so keen to approve this if it had been Man Utd).

We started the day with a walk around the vehicle to give a visual inspection, including light checks, to ensure the truck and trailer were safe to drive. Mark opened an app called Truckfile on his mobile phone to log his inspection online.  Mark had been advised the day prior that he would be doing four deliveries of steel coil to a key customer in Newton Aycliffe today. So we then reported into the office at our automotive metals store to be issued with the coil number paperwork for our first delivery.

We jumped back in the truck and drove to door 2 of our automotive metals store to be loaded with our first coil. This coil weighed over 20 tonnes so the trailer can only hold one coil at a time. We used our ratchets and straps to secure the coil safely in position. We then returned to the office to confirm that we had collected the right coil and be issued with the delivery paperwork. Before we left site Mark logged into another app on his phone to confirm that we were loaded and were leaving site. This app is updated at each point in the delivery process so the customer can track their products and see the latest progress on the delivery. 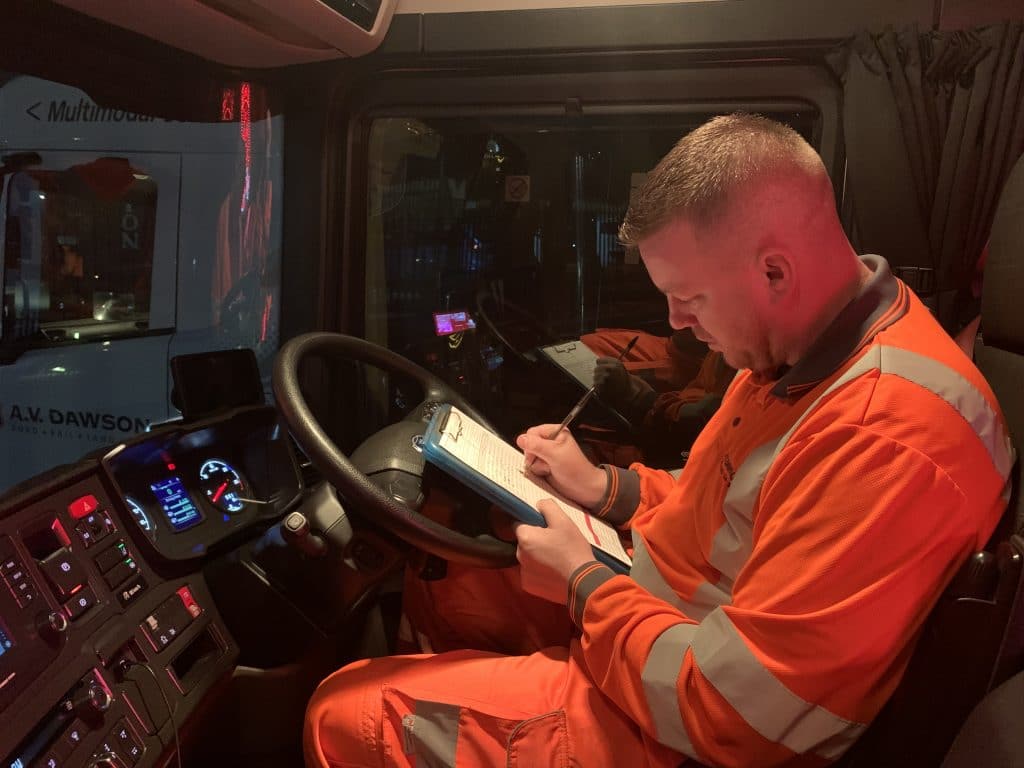 We arrived at the customer’s factory in Newton Aycliffe at 7.30 and buzzed the intercom to report to their security team. We then drove into the unloading area in the factory and unstrapped the coil ready for the customer to use their overhead crane to unload the coil. The whole process was very slick and well-coordinated and couldn’t have taken more than ten minutes.

We drove back to AV Dawson to collect another coil for the same customer.

We arrived back at AV Dawson Transport’s site, collected the coil paperwork for our second coil, picked up the coil and the delivery paperwork and drove to Newton Aycliffe to make our second delivery.

We arrived back at AV Dawson Transport’s site and grabbed a bacon sandwich during our 15-minute morning break. There was then time to fit in one more delivery to Newton Aycliffe before lunch.

After lunch, instead of doing our last delivery to Newton Aycliffe, we had the opportunity to go to Skinningrove to collect a load of steel beams that needed to be containerised at AV Dawson’s TRIP terminal. So we dropped off our coil trailer near the transport office and swapped for a flatbed trailer. It’s a relatively quick and easy process swapping trailers over – the driver just lowers his truck’s suspension to get under the trailer and then as he reverses the trailer is automatically guided into position and locks into place. We then just had to wind the trailer’s legs up (which can be a bit heavy going on older trailers) and then fix our registration plate in place and do the various checks to ensure the trailer was safely attached and all the lights were working.

At Skinningrove we were collecting a live load (ie. our trailer would be loaded while we were there rather than us collecting a trailer that had been pre-loaded). We had to wait on site for quite a while as the customer was busy with other loads. To secure this load we had to use heavy chains and warricks. Mark showed me the techniques we use to make this process relatively easy. 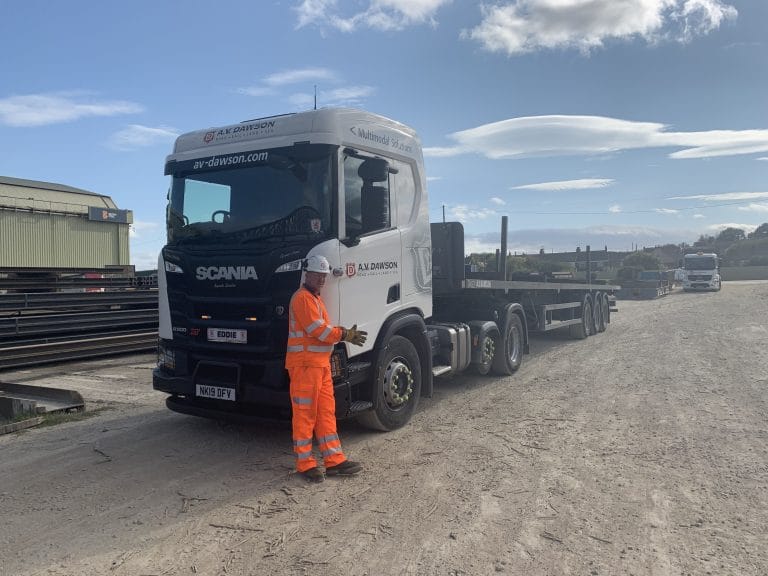 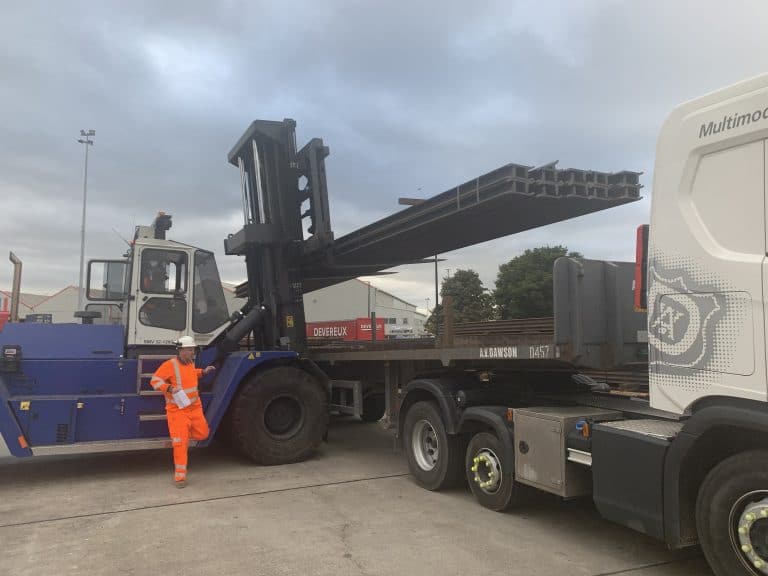 We drove back to AV Dawson’s site and reported to the office at our TRIP terminal. We removed the chains and Mark showed me a simple technique to wind the chains up which would avoid them being tangled next time he used them. The TRIP team then unloaded us with their 30-tonne forklift truck.

We went to the transport office to touch base with the office-based team. After having a bit of banter with them for ten minutes Mark was given his first job for tomorrow, which was a container delivery to Newcastle, so we then went to our Ayrton terminal to unhook the flatbed trailer and hook up to the trailer that already had the two containers loaded on. That would have been the end of the shift except that our light checks on our trailer failed due to a blown fuse. Fortunately, Mark was able to change the fuse himself and get it working but this did put us back 20 minutes or so. We then drove to the port to refuel at 17:45 and by 18:00 we were parked up and finished for the day.

Summary reflections on the role

Overall it can be a long day but you’re paid for the hours you do. Mark chooses to do a couple of nights a week and some Sundays but always likes to keep his Saturdays free to watch his kids play football. The work is steady paced and drivers are encouraged to drive safely rather than feeling under pressure to get to their next delivery. There’s also invariably some downtime between deliveries when you’re waiting to load and this can give you the opportunity to relax and also catch up with other drivers on site too. Mark commented about how he liked being on the open road and feeling like he has that independence but to also have the back-up, security and support of working for a company (rather than working for yourself).

Apply to become an HGV Driver