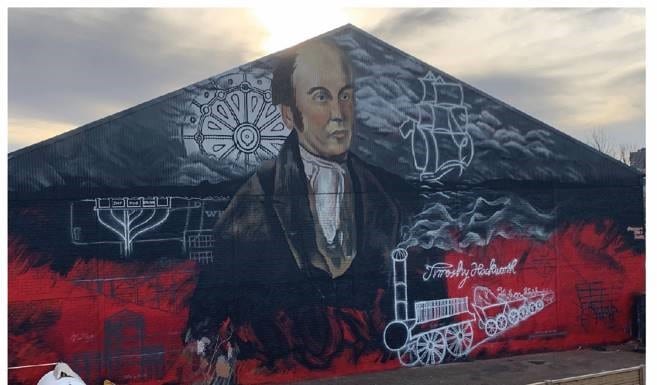 THE BIRTHPLACE OF MODERN MIDDLESBROUGH

At the time, the port was called Port Darlington and local industry grew rapidly and the settlement of Middlesbrough expanded – initially as a coal export town and later as an iron and steel manufacturing centre. The site, which became known as Port of Middlesbrough, underpinned the economic development of the new industrial town – it can therefore lay claim as the birthplace of modern Middlesbrough.

A HIDDEN HERO
A rail engineer from Shildon named Timothy Hackworth played a key role in Middlesbrough’s story of growth and success. Often overshadowed by better-known characters in the region’s industrial history, Hackworth was a rail pioneer and was pivotal both to the original development of Port of Middlesbrough, and to the evolution of the railway across the world.

Hackworth was the superintendent engineer of the Stockton & Darlington Railway from May 1825 and responsible, as the mechanical engineer, for the building and maintenance of all its locomotives. Among his many inventions, Hackworth designed the original coal loading staiths at the port as well as “The Globe” – the first locomotive to deliver its precious cargo. Much of the subsequent success of Middlesbrough was born out of the imagination and engineering prowess of this great man.

COMMEMORATING A HISTORIC MOMENT
This 200-metre square mural has been commissioned to commemorate this inspirational story and local legend, and specifically to represent the official opening of the coal export staiths at Port Darlington – today’s Port of Middlesbrough.

The train bound for Port Darlington left Darlington at 10am on 27 December 1830, pulled by The Globe locomotive. Local dignitaries and special guests sat in converted cargo wagons and wore specially struck medals on blue ribbons around their necks, although the most precious passenger was a 3.5 tonne lump of coal. As Hackworth’s staiths dropped the coal into the ‘Sunniside’ ship, Francis Mewburn, the railway solicitor, toasted the success of the enterprise, along with 600 banqueters on the quayside.

ARTIST’S IMPRESSION – WORDS FROM THE ARTIST

This mural is dedicated to a true northern genius. It follows the thread of imagination through his technical drawings to the stories sparking the beginnings of the Middlesbrough we know today.

The engineering drawings are some of the best-preserved materials from that time, and so, as pictures and photos from this period are limited, we can use these technical illustrations to imagine for ourselves how it might have been.

By collaborating with researchers, AV Dawson has traced Port of Middlesbrough’s place at the forefront of innovation in the rail and shipping industry, right through to today. We want to use this story to inform, inspire and spark the imagination of the potential geniuses of tomorrow.

AV Dawson would like to thank a number of people and organisations for their support, including: 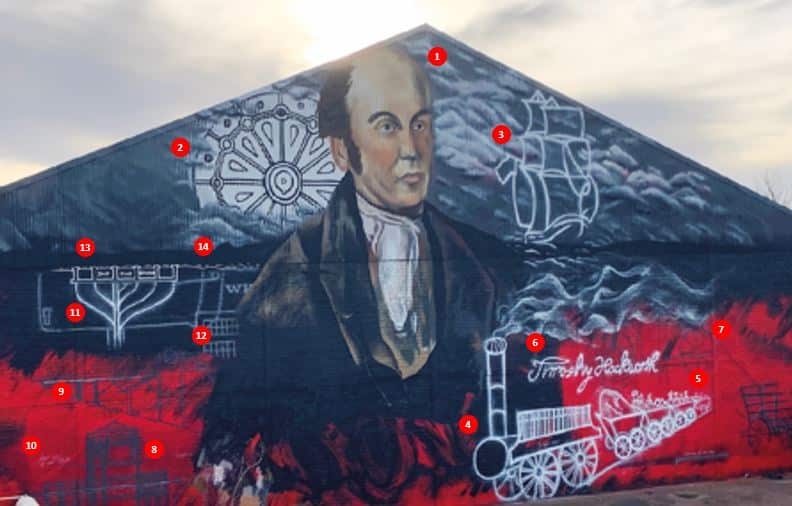 Timeline of the mural

As part of their ‘Industrial Middlesbrough’ History module, we invited Sunnyside Primary School down to Port of Middlesbrough, to learn more about the history and heritage of the site.

The children learnt about the history of the port and the business through our timelines, which are based in The Staiths, our new HQ building.

The school then headed down to visit our mural and met the artist who painted the mural, Lewis Hobbs from Durham Spray Paints.

Lewis spoke about his role and how he managed to design and paint a mural so huge!

The children then got creative and painted murals on their own on blank canvases, using spray paints and tools.